The team of the Laboratory of Tumour Resistance and Service technology laboratory (both Institute of Biotechnology, Czech Academy of Sciences (IBT, CAS) has developed a novel anti-cancer drug that interferes with mitochondrial iron metabolism. The combination of mitochondrial targeting and interfering with iron metabolism of cancer cells represents a new approach that results in significant cytostatic, cytotoxic and migrastatic effects of the agent on cancer cells in vitro as well as in vivo. The study has been published in Cancer Research.

“Cancer cells have higher iron demand to fulfill their metabolic needs and the enhanced biosynthesis of cellular components that are necessary for sustaining cellular proliferation. Iron is a critical cofactor of many metabolic enzymes, mostly in form of iron-sulfur clusters and heme, both of which are synthesized in mitochondria. Thus, interfering with mitochondrial iron metabolism of cancer cells affects their ability to proliferate and metastasize and eventually induces their death," says Jaroslav Truksa, head of the Laboratory of Tumour Resistance.

The newly described mitochondrially targeted deferoxamine (mitoDFO) takes advantage of the distinct functioning of cancer cell mitochondria and preferentially affects cancer cells while sparing non-malignant ones, which is an important feature of the agent. Furthermore, the compound does not alter systemic iron metabolism in preclinical mouse models, corroborating the preferential targeting of cancer cells.

The research included also cooperation with the Molecular Therapy Group (IBT, CAS) and the Cancer Cell Invasion Laboratory (Faculty of Science, Charles University). The initial phase of the project was also supported by Smart Brain s.r.o., a company which helps funding projects with high translational potential. The study thus illustrates the strong cooperation within the BIOCEV Research Centre and attractivity of our research for private investors.

"We gladly accepted the invitation of Jaroslav Truksa and colleagues from the Institute of Biotechnology to participate in research on anti-cancer effects of the very interesting molecule - mitoDFO," says Jan Brábek, head of the Laboratory of Cancer Cell Invasiveness (PřF UK). "In our research, we found that mitoDFO is a very effective inhibitor of cancer cell migration and invasiveness. Migrastatic effects in 3D models were subsequently reflected in the strong antimetastatic effect of the molecule in the animal model. The research is a nice example of the interconnection of expertise within BIOCEV across individual institutions, our laboratory cooperates with colleagues from the Institute of Biotechnology on several projects linking tumor metabolism and cancer cell invasiveness.” 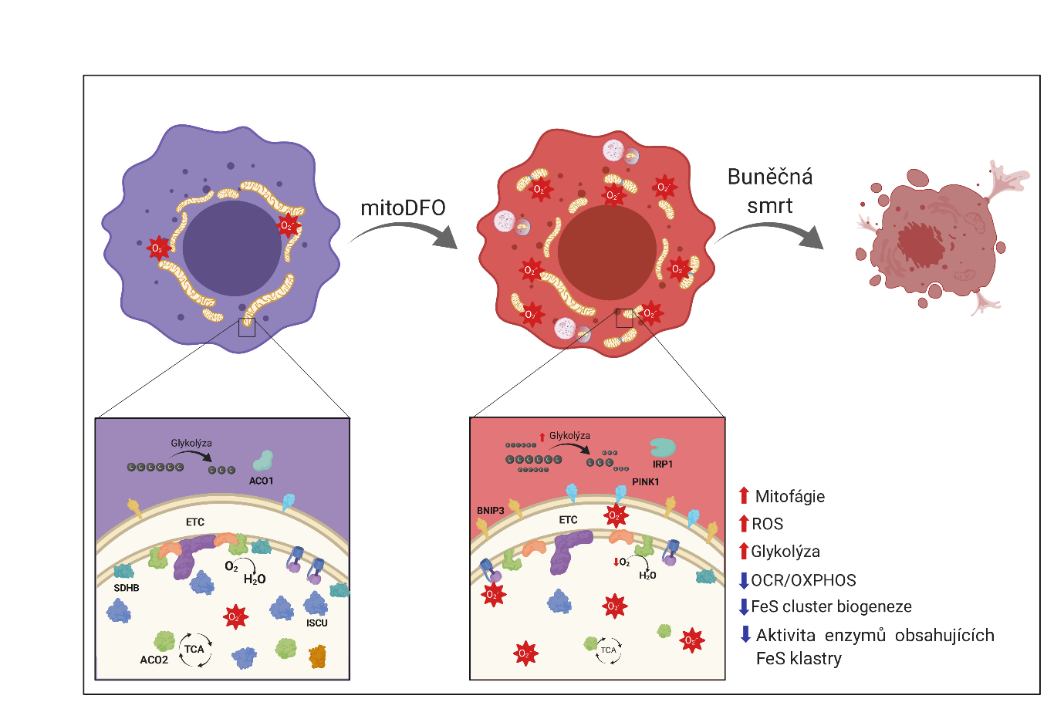