A new study from the Institute of Biotechnology’s Molecular Therapeutics Laboratory led by Prof. Jiří Neužil in collaboration with Prof. Karel Pacák’s group from the National Institute of Health (Bethesda, MD, USA), which led to the discovery of eight SUCLG2 gene variants in patients with neuroendocrine tumours, puts SUCLG2 on the list of genes whose pathogenic germline variations may increase the risk of cancer development due to misregulation of cellular metabolism. The results of this study were published by the prestigious professional Journal of the National Cancer Institute.

Mutations in the SUCLG2 gene can lead to dysregulation of succinate dehydrogenase (SDH) and subsequently to changes in cell metabolism and the development of neuroendocrine tumours. SUCLG2 is a subunit of the Krebs cycle enzyme SUCL, which results in succinate, a substrate for SDH. SDH is located at the crossroads of two very important metabolic pathways, the Krebs cycle and oxidative phosphorylation.

Pheochromocytoma and paraganglioma (PPGL) are neuroendocrine tumours originating during the third week of embryonic development. A newly published study shows that they are linked to a gene whose mutations in PPGL patients had been previously unknown. More extensive sequencing is planned for the future to help clarify the prevalence and penetrance of SUCGL2 variants and to clarify which of these variants cause PPLG disease.

"We will characterize individual variants of the SUCLG2 gene to determine whether they are malignant mutations in all cases, i.e. leading to severe changes resulting in tumour formation, or benign mutations that should not affect tumour development," says prof. Jiří Neužil. "We will also sequence these mutations related to individual patients in order to prevent the formation of tumours, i.e. to perform “gene-informed counselling”."

The figure shows the relationship between the Krebs cycle and the SDH enzyme, which consists of 4 subunits and is bound to the inner mitochondrial membrane. In the reaction preceding the SDH-catalysed reaction (the conversion of succinate into fumarate), the succinyl-CoA substrate is split by the succinate CoA ligase enzyme (consisting of SUCLG1 and SUCLG2 subunits) into CoASH and succinate, resulting in the formation of GTP. Succinate is a substrate of the SDH enzyme, whose function is critically affected by mutations in SUCLG2. For that reason, the SUCLG2 subunit can be considered a tumour suppressor. 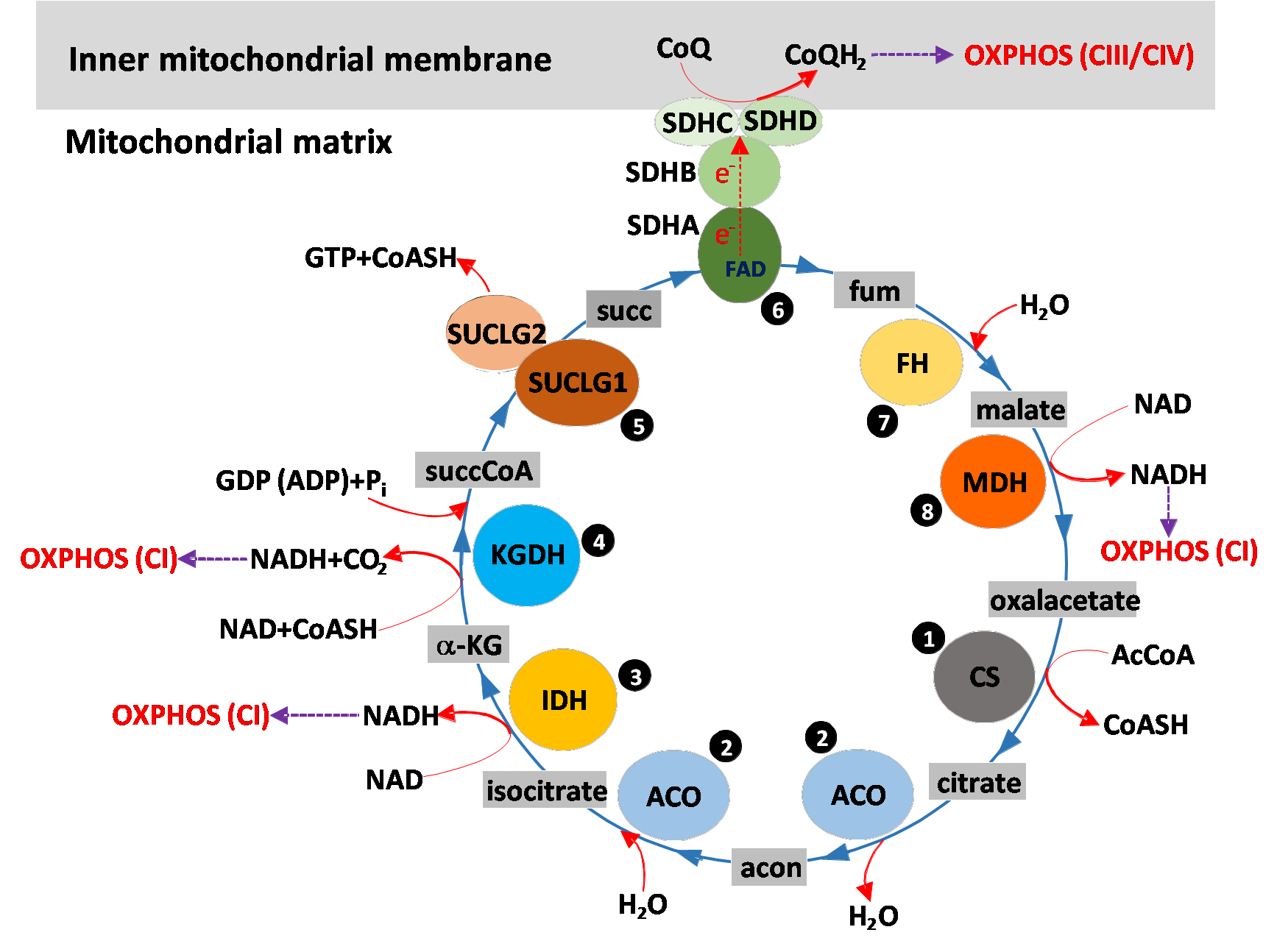